Eric has been moved to the Federal Transfer center in Oklahoma. The phone block is still in place. We will update when he is placed at a new prison and what we can do to continue to fight to open the lines of communication with his family.

We received an update regarding his disciplinary hearing. We think it is important to share Eric’s words rather than us try to explain the trauma that is involved in these hearings. As of right now communication is still restricted between Eric and his partner. Eric has filed a grievance and then two appeals to the grievance. Both times asking why the contact is restricted and to remove the restrictions. The response to each was that they already told him and that he said he understood. If they did indeed tell him (they didn’t) then why should they have a problem informing him and his lawyer again. It is shady business as usual at USP Leavenworth and the BOP regional office.

Eric after giving him ample time to respond to his grievances and will begin his hunger strike again on February 19th and will only end when he receives answers and the phone block is removed, or he is moved from the facility.

You can help Eric by printing out the Hogwarts inspired acceptance letter [here  https://supportericking.org/2019/02/12/flood-the-mailroom-in-support-of-eric/] and sending it in as well as making copies (or asking friends to) for your friends and comrades. We need as many of these sent in as possible. Bring them to your local monthly letter-writings, meetings ect. Any way we can get these sent out in mass is great.

You can also help by being ready to spring into action on the 19th of February when Eric goes back on his hunger strike. We will post the instructions regarding how to help apply pressure to the BOP regional office as well as USP Leavenworth then.

At the end of this nightmare he will have been in segregation and separated from his family for at least 226 days and At 180 days (today), he will be one of just 398 people out of 151,000 in the SHU for that long . 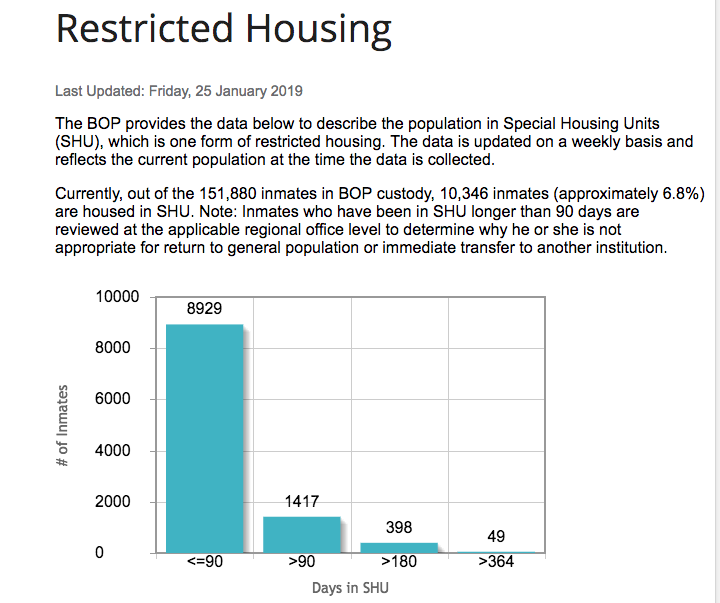 In the letter below he is referencing his losses after his disciplinary hearing where the charges against him for assault were upheld. Canteen is his ability to purchase items for commissary. And an update, they didn’t take away his phone but as a cruel joke his wife’s number was still blocked when he tried to call. They again set him up with hope only to knock him down. Points of clarity Eric did file grievances about the assault. Two of them were “lost” hopefully the 3rd one gets processed soon. The video tape that the north central regional officer Mrs Bryant showed Eric being dragged into the closet and dragged into the hallway where he lay limp not resisting in any way.

Below the image in the interest of accessibility and for easy translation is the text of the letter. 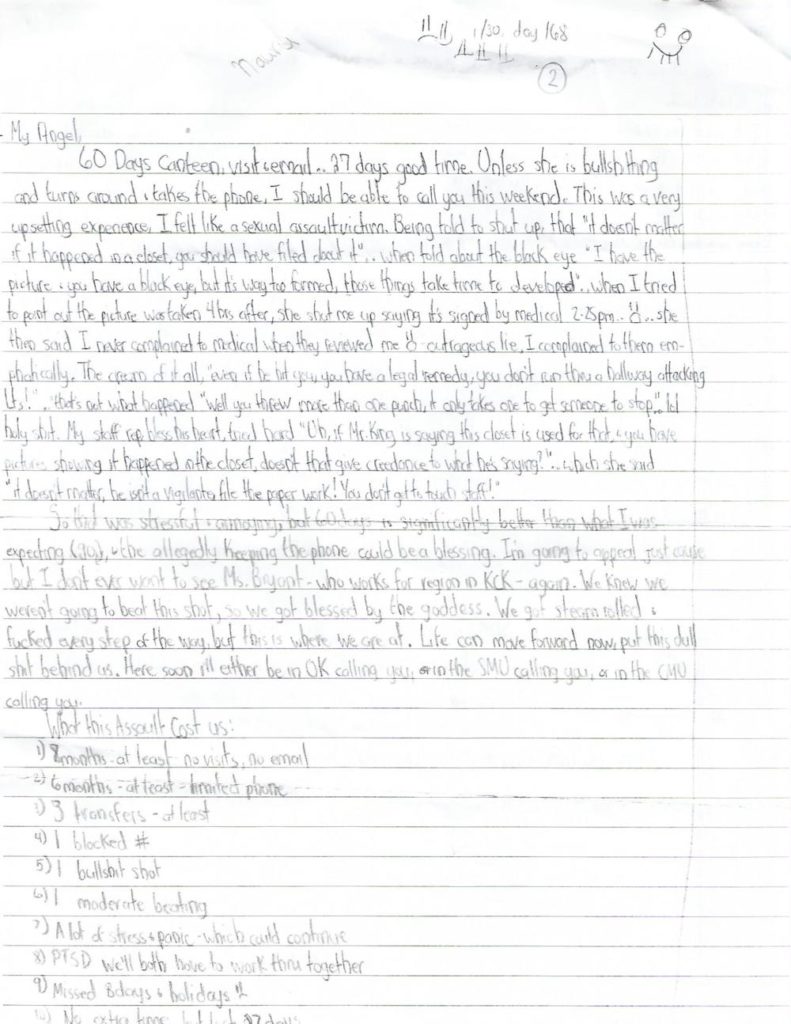 60 days canteen, visits + email… 27 days good time. Unless she is bullshitting and turns around and takes the phone, I should be able to call you this weekend. This was a very upsetting experience. I felt like a sexual assault victim. Being told to shut up “it doesnt matter if it happened in a closet, you should have filed about it”… when told about the black eye “I have the picture + you have a black eye but it was way too formed, these things take time to develop”… when I tried to point out the picture was taken 4 hours after she shut me up by saying it was signed by medical 2:25pm… :-O … she then said I never complained to medical when they reviewed me :-O outrageous lie, I complained to them emphatically. The cream of it all, “even if he hit you you have a legal remedy, you dont run through a hallway attacking Lt” “ that’s not what happened” “Well you threw more than one punch it only takes one to get someone to stop”. Lol holy shit. My staff rep, bless his heart, trued hard “Uh if Mr King is saying the closet is used for that + you have pictures showing it happened in the closet, doesnt that give riddance to what he is saying?” …. which she said “it doesnt matter, he isnt a vigilante, file the paperwork! You dont get to touch staff”

So that was stressful and annoying. But 60 days is significantly better than what I was expecting (90) the allegedly keeping the phone could be a blessing. I’m going to appeal just cuse but I dont want to see Ms Bryant- who works for the region in KCK again. We knew we weren’t going to beat this shot, so we got blessed by the goddess. We got steamrolled + fucked every step of the way but this is where we are at. Life can move forward now, put this dull shit behind us. Here soon I’ll either be in Oklahoma calling you, in the SMU or in the CMU calling you.

What this assault cost us:

2. 6 months-at least- limited to no phone

7. A lot of stress + panic- which could continue

8. PTSD we’ll both have to work through together 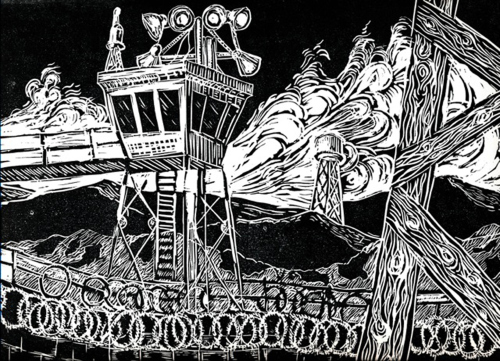 Update on Eric’s Attack and situation 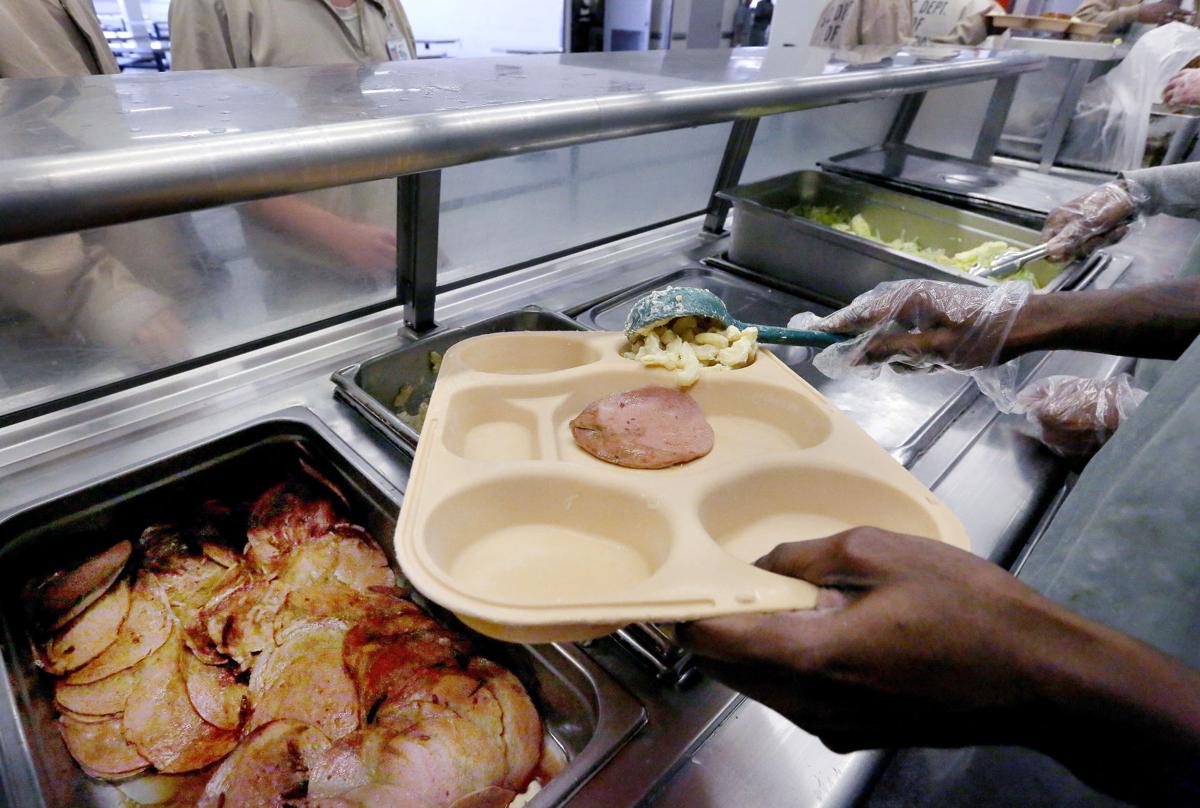 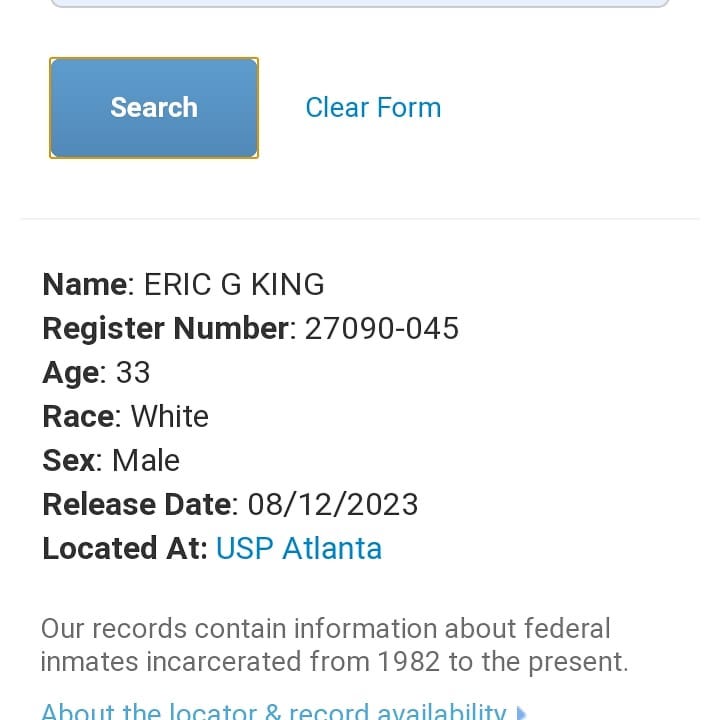