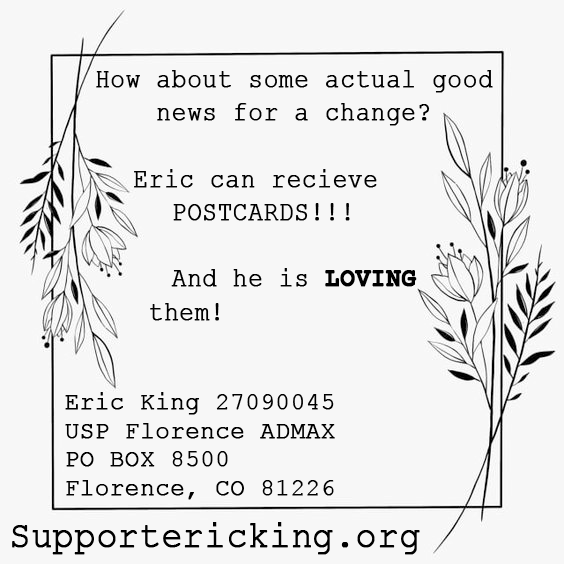 Eric is so grateful, overwhelmed and humbled by all of the support that has been coming in. Taylor Swift news. Feedback on his writing. Books, notes, letters. He had tears in his eyes this weekend when he was told about it. Life afterward has been on his mind a lot. Getting out, surviving and raising children. And also wrestling with the inadequate feelings when it comes to job prospects, housing and an incredible foreign world. When he entered prison there was not a ton of people lining up his support him. It took months to get a book purchased from his list. Seeing real tangible support is helping quiet those fears. Thinking about cars, computers and capitalism and how much closer he is to working it all out.

Outdate fundraiser link here (we started at a small goal to help him see a little bit of stability <3 we will be fundraising in different ways as well as adjusting the goal a bit as we get closer) https://gofund.me/a7a87920

He Has been having some really intense neck problems some he has been seeking help for 3 plus years. some new and affecting his movement and ability to respond to letters right now. He wanted us to tell everyone how the letters have been so amazing but it has been so painful to write he has found himself out of necessity needing to shorten his responses as he waits for mri scans

Things have been ok. He has finally has his first phone call with his family since 2018, and first visit since the week after trial. He is a bit overwhelmed by the difference in respect that comes from the guards around him. Well trained guards, because the ADX demands that. Guards that know the law and are asked to follow it. It has definitely caused some reflection and wonder… what would it have been like if he were met with guards like this in Englewood? Florence medium? Leavenworth, USP McCreary? FTC Oklahoma? USP Atlanta? USP Lee?

He is safe and thinking about what it will be like ending this year on his way to freedom <3 We have added some notebooks to his Amazon book list because he needs some paper that is a manageable size. As well as his current obsession and the goal reading every book Colum Mccann has written.