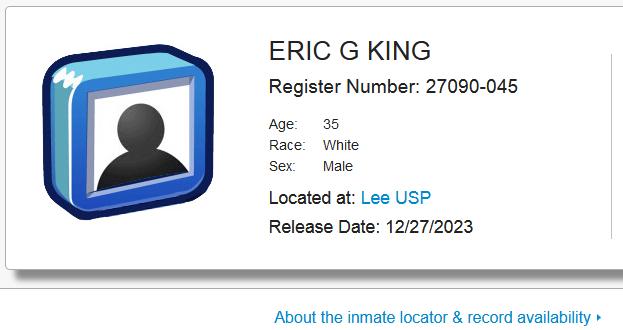 UPDATE: MAY 4, 2022 CONCRETE CONFIRMATION ERIC IS CURRENTLY AT MAXIMUM PRISON USP LEE. KEEP UP THE CALL-IN CAMPAIGN TO DEMAND ERIC’S RIGHT TO LIFE.

Eric received a response to his grievance filing within the Federal Bureau of Prisons (BOP) Friday April 29th at USP Atlanta about his improperly applied management variable forcing him into maximum security prison when in actuality he’s a medium/low security designation. He was told by the BOP he has no maximum management variable.

Yet today, Tuesday May 3rd, Eric has been transferred on a bus heading east.

We need to support Eric in having his unit team at USP Lee re-designate him to a proper security level and a prison facility that hasn’t knowingly threatened his life.

The BOP has given contradictory information regarding addressing Eric’s safety, meaning Eric needs eyes on him now more than ever.

One example on file of Eric’s medium security designation:

Yet BOP tells state representatives this: 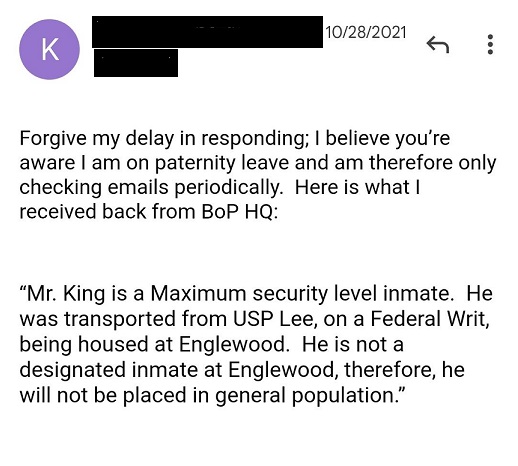 THE BOP EITHER LIED TO ERIC ABOUT HAVING NO MANAGEMENT VARIABLE, OR THEY ARE DESIGNATING HIM TO A MAXIMUM SECURITY FACILITY ILLEGALLY, OR THEY ARE FORCING ERIC TO USP LEE TO BE “RE-DESIGNATED” PROPERLY.

We cannot allow the BOP to knowingly put Eric’s life at risk. Originally in 2018, Eric was told at USP Atlanta and USP Lee his life would be in danger by white supremacist gangs if he ever did a long stint at USP Lee, and Eric was originally told the dangers of USP Lee shortly after he was attacked by white supremacists at USP McCreary in 2018. The BOP is knowingly putting Eric at risk with these designated transfers 4 years later.

We need supporters to continue contacting the BOP everyday, as well as your district’s Congresspeople and your state’s Senators, to demand Eric’s right to finish his time at a properly designated prison and to not ignore his safety concerns, his lack of mail, his medical concerns needing addressed, access to legal calls, and access to calls with his family. All contact info and an updated letter template are supplied in this post.

Eric has no pending charges, criminal history or disciplinary sanctions qualifying him for maximum security;

Eric was found not guilty March 18, 2022 for assault on federal officer due to acts of self defense, and merely wants to finish his original sentence as smoothly as possible as he’s due for release December 2023;

Eric has filed grievances to address his improper designation for maximum security and the threats made to him by white supremacist gangs at USP McCreary, USP Atlanta and USP Lee are documented;

Eric, his family and legal team need proof he does not have an improper management variable and will be properly designated based on his actual security level of medium/low;

Eric has medical concerns including swollen lymph nodes and a potential TBI being neglected;

Congressman Joe Neguse’s office as well as Congresswoman Cori Bush’s office have been given Eric’s extensive history within the BOP to enable a Congressional inquiry.

Amnesty International has also contacted the BOP’s director Michael Carvajal: “Transferring Eric King to a maximum-security facility across the country, far from his family and loved ones when he has such a short amount of time remaining on his sentence seems to be more retaliatory and punitive rather than necessary due to specific security concerns. Under Rule 59 of the UN Standard Minimum Rules on the Treatment of Prisoners, “Prisoners shall be allocated, to the extent possible, to prisons close to their homes or their places of social rehabilitation.” The BOP must revisit the issues within Eric King’s security profile which allow his eligibility to be at a maximum-security facility and the decision for him to be placed so far from where his family resides and where he intends to settle upon release.” Please SHARE the letter in it’s entirety here: https://supportericking.org/wp-content/uploads/2022/04/Amnesty-International-USA-TG-re-transfer-of-Eric-King-inmate-number-27090-045-1.pdf

Congresspeople respond to their own constituents, which is specified by your legal address. Senators respond to people that live in their specific state. When calling the BOP, press zero to get to an operator if need be.

I am writing about my friend who is a prisoner in the Federal Bureau of Prisons. His name is Eric King, inmate number 27090-045. He was recently found not guilty on all counts at a trial in the U.S. District of Colorado. Eric was moved from FCI Englewood and was transferred from a private facility, Grady County Jail in Oklahoma, to USP Atlanta, where he was put on a bus headed east Tuesday May 3rd. He has been told by numerous BOP staff he is en route to USP Lee, a maximum security prison in Virginia.

There is an active threat against his life. A few years ago, before being sent to Colorado, Eric was held in the Segregation Unit at USP Lee for approximately two weeks. Before that, at USP Atlanta, a white supremacist gang member told him he would be killed at USP Lee if he was released into general population. This was documented at USP Lee. Eric was originally transferred to USP Lee and Atlanta under the US Marshalls after he was attacked by white supremacist gangs at USP McCreary.

Additionally, Eric is in this situation because of a bogus maximum management variable on his security profile. This has him erroneously being sent to a facility beyond his actual security level. He has no pending charges and no incident reports. He has no criminal history or disciplinary sanctions qualifying him for placement at a maximum security prison.

He intends to be released to Colorado to live with his wife and his two children in just over a year. We need proof to Eric, his family and legal team the management variable is removed so that he can be sent to a medium- or low-custody prison close to home and begin preparing for release. We also need guarantees Eric will not be cut off from his legal team and family with phone calls or visits or mail, as well as Eric having access to writing utensils, paper, envelopes and stamps. 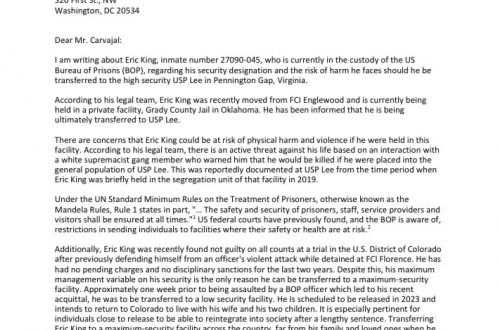