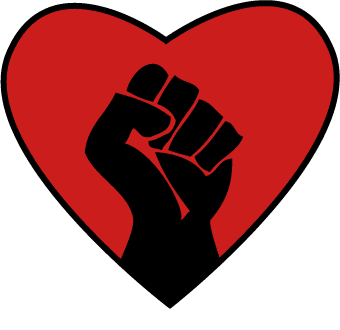 Our calls have kept the prison bureaucrats annoyed, flustered and irate. And Eric has received a little bit more food a couple times—even though they’ve withheld food as punishment just as much. Eric has also had bureaucrats coming by his cell to assure him that they’re doing everything in their power to fix this situation. Whatever they’re doing, it’s not enough—not enough to get him the nutrition and caloric intake he needs each day. Not enough to call us off!

We won’t stop ringing the phones off the hook until CCA Leavenworth ensures Eric consistently receives adequate food each and every meal. Please call again today to demand that he immediately receive an adequate vegan tray (equivalent nutritionally to the standard tray) and access to commissary so he can supplement his nutrition.

Eric has been denied sufficient calories since February 24th. His health can no longer wait for the bureaucrats at CCA Leavenworth to play their games. So we’re expanding the call-in to include CCA Corporate as well. Let’s let the corporate masters know that they have a problem brewing in one of their facilities that will only go away when they ensure Eric receives adequate food!

When calling, emailing, and faxing, remember to be firm and clear in your demands. Also remember that Eric is still awaiting sentencing and anything can be used against him. Politely worded demands are likely to be more beneficial to Eric than anything the state could misconstrue as threatening, bullying, etc. in court.

* You can send faxes for free through http://faxzero.com/. You can type your message directly into the text box on the fax form online, upload your message as a Word doc or PDF, or both.

“Hi, I’m calling about Eric King, number 27090045. He’s being held in disciplinary segregation right now and is on commissary restriction. Because the vegan tray that Eric gets is so inadequate, and since he can’t supplement it with commissary, Eric is starving.

“We calculated that Eric is getting approximately 940 calories per day from the vegan tray. This is way under the recommended daily intake of 2,400-2,800 calories. Eric access must receive more food right away. This can be done by giving him access to commissary and by immediately improving the vegan tray that you provide.

“Eric is getting dizzy, having trouble concentrating and feeling hungry all the time. We need to address this situation immediately. Thank you.”

If leaving a message, feel free to leave a name and call back number, but you don’t have to.

I’m writing about Eric King, number 27090045, an inmate at CCA Leavenworth. Eric has been held in disciplinary segregation since February 24th and is on commissary restriction. He is also being denied adequate nutrition and the required daily caloric intake because the vegan tray he is being served does not contain enough food. According to the Performance Based Detention Standards, he should be receiving an equivalent amount of calories each day as inmates who receive the standard tray.

We calculated that Eric is getting approximately 940 calories per day from this inadequate vegan tray. This is way under the recommended daily intake of 2,400-2,800 calories. As a result of this starvation diet, he has been experiencing dizziness, trouble concentrating, and hunger pains.

Denying anyone adequate nutrition for such an extended period of time will inevitably lead to severe, potentially irreversible, health problems. I join with friends of Eric from around the world to demand that this not happen and that he immediately starts receiving the required amount of vegan food each day. Additionally, we are demanding that he be restored access to commissary so he can supplement his diet and regain the weight he has lost through this ordeal.

Please ensure that Eric immediately receives the required amount of food each day and restore his access to commissary.

Thanks for continuing to stand in solidarity with Eric in this terrible time! Your support means the world to us and literally means his life to him.

On Thursday, march 17th Eric was called in for a meeting, and he was under the impression that at this meeting it was his disciplinary status and hole time that would be discussed. Instead all the chief wanted to talk about was the call-in campaign which has nothing to with his sentence in disciplinary segregation. So, when Eric refused to talk about the call-in campaign the meeting was ended by the chief. This tells us that as long as folks are speaking up about Eric’s dismal food portions that CCA will refuse to take the initiative to end his ridiculous punishment.

Eric has been experiencing other forms of retaliation, for example: his access to the phone is severely limited, mail has been held back and none of his grievances are being addressed. Grievances per policy,are supposed to be addressed within two weeks and he has 4 that have had no response that are over that time-line. When folks call in one of the responses that they’ve been receiving is that Eric simply needs to grieve his issue about the food. Not only has he done that without even a denial as a response but it looks like the people at CCA Leavenworth will not even respond to his grievances.

As a response to the call-in campaign Eric has been getting a whole tray of beans which has been making him extremely sick to his stomach. Then when his tray is taken the guards record how much of it he eats. This is not a solution, Eric needs a balanced meal and a CHANGE in policy for the vegan tray. Folks will not be silenced because for a week or two his miniscule portions have actually increased in an unhealthy way. This is a weak attempt to make it appear that there is no problem.

Please keep up the calls, clearly they are feeling the pressure at CCA Leavenworth and even folks at CCA corporate are scrambling as a response.

Yesterday while Eric was out at Rec guards searched his room confiscated every single commissary food item he had been given in solidarity by other prisoners in segregation. Guards also took Eric’s radio from him, which is such an escape to him during time spent in segregation. They informed him that it is a new rule that disciplinary segregation prisoners can not have radios. Despite what they are telling people on the phone, this is not an organization that is concerned by Eric or any other prisoner having food. Confiscating food as a form of punishment and intimidation is just as unacceptable as refusing to provide them adequate nutrition. 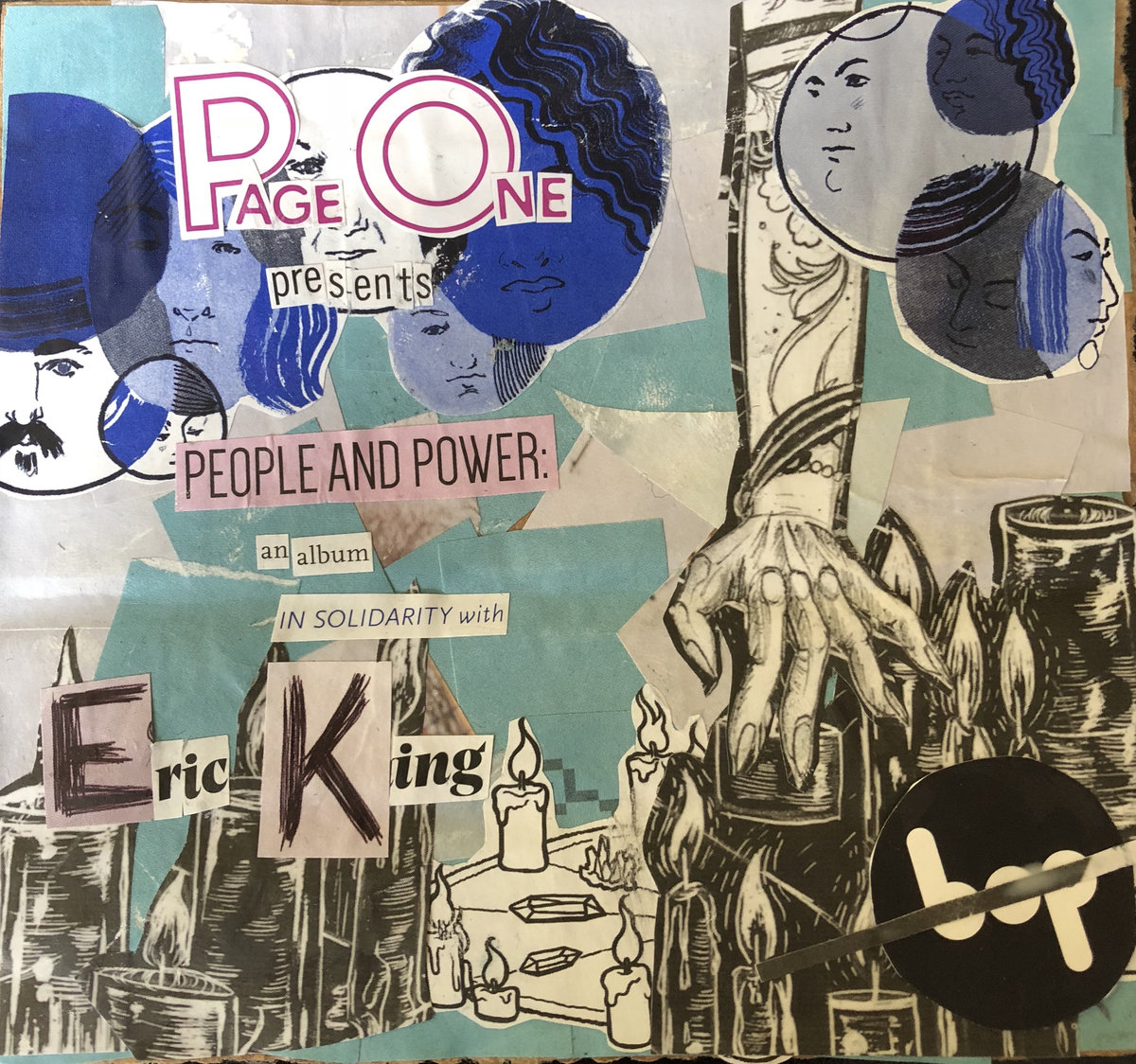 Support Eric and his family 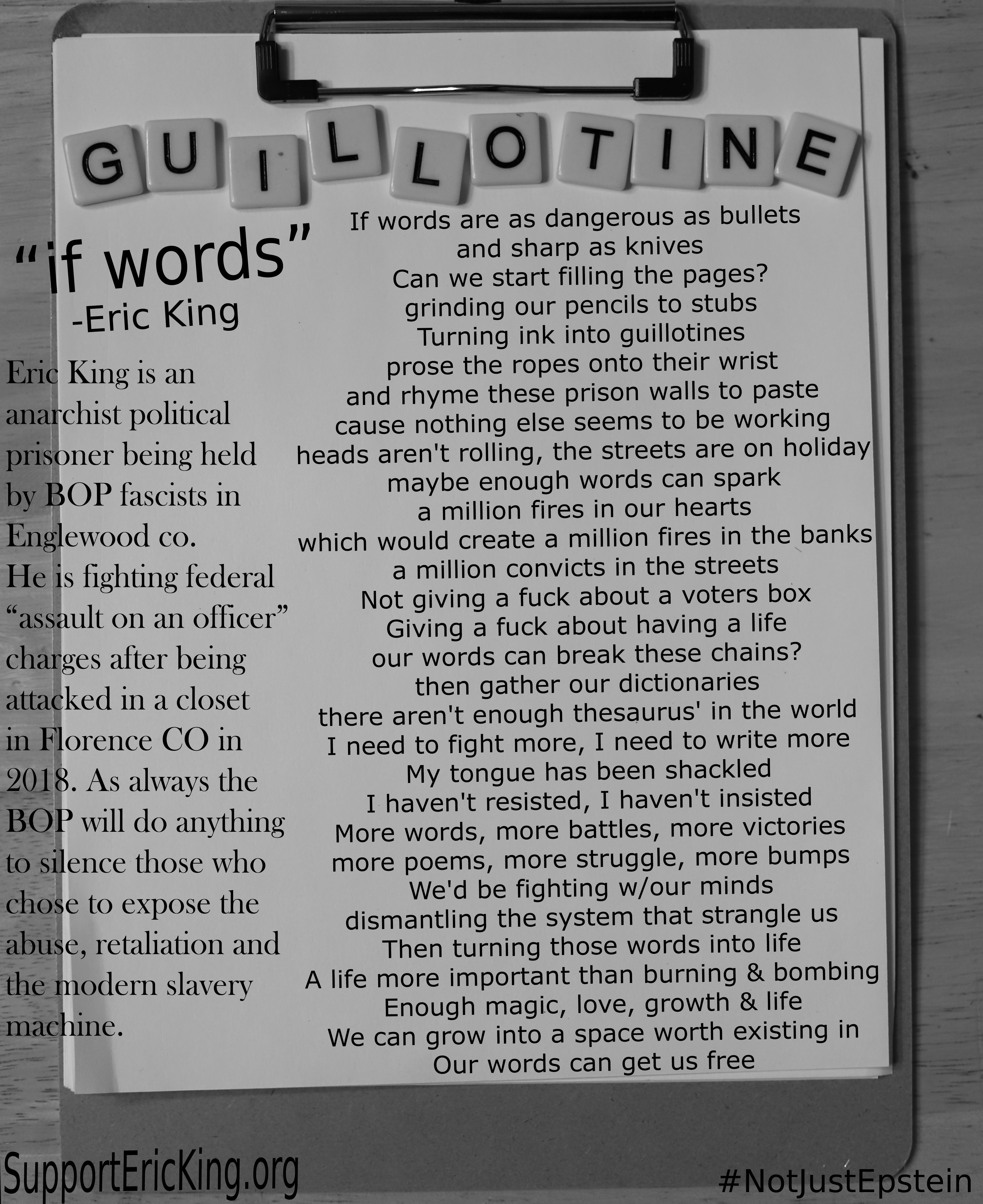 “If Words”… a poem by Eric King